About Us – a few things about our history

Before the Denver House was built in 1972, three old mansions stood in its place. The one in the middle of the site had been torn down before the present owners purchased the ground, and the other two were in a state of poor repair, having been converted a number of years back to low rental rooms and apartments. However, the glory that had once been there, in the era of the gold kings, was still evident – much of it under layers of paint. The owner’s decided that as much as possible should be preserved for the new building, and that a fitting name for the new building would be “The Denver House.”  While putting it all together, other artifacts from Denver’s antiquity were incorporated.

On each side of the entry to the outside court stand the two large urns which once graced the front porch of the Moffat Mansion. The main entry doors are decorated by the iron grilles and the hardware from the Charles L. McIntosh Mansion, the original home on the south end of the property.  It was built in 1890 by William Mygatt, who was a partner with McIntosh in The National Bank of Commerce, a Denver banking firm.  McIntosh bought the home a year later in November 1891.  The magnificent group of windows between the vestibule and the main lobby once graced the stairway of the McIntosh Mansion. The stairway itself was quite famous even in the old days, reportedly having been brought to Denver from the Astor Mansion in New York.  The carving from the header of the stairs can now be found incorporated into the console piece under the mirror in lobby. The mahogany columns, ceiling plaques, and the large single stained-glass window of the lobby are also from the McIntosh mansion, as well as the large columns by the elevator, and the detail for the decoration of the doors that enter into each of the apartment units.

The display case of Denver Memorabilia in the billiard room along with the various newspapers, photographs, and paintings from early Denver are self-explanatory 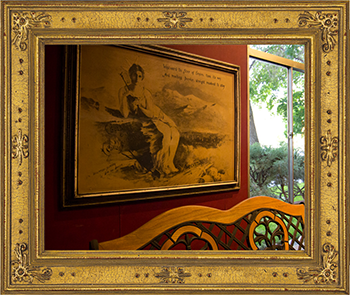 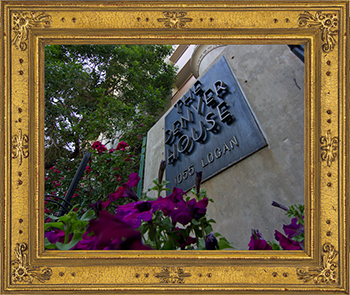 Most of the antique light fixtures used, including the magnificent lobby chandelier, came from the mansion on the north end of the property, which was built by Alvin C. Dake in 1891.  He had been active in gold mining in Breckenridge, was in the business of supplying charcoal to the smelters in Leadville. The now ghost town of Dake, not far from the present town of Jefferson on Kenosha Pass was named after him. The staircase in the rear lobby, the brass door hardware, the fireplace front, paneling, and back bar of the formal party room were also from this mansion. The large group of leaded glass windows in the pool room were once on the stair landing of the mansion.

The abstract of the land itself, on which the mansions were later built, contains several colorful names from Denver’s past, such as Moffat, Emery, Grant, and Wolcott.  The area was known as “Quality Hill,” and Logan Street was known as Kansas Street.

We hope that visitors and residents alike at The Denver House will appreciate knowing the history behind it and will enjoy the restoration of these fine architectural accessories.

We express our appreciation to the Colorado Historical Society and the Research Division of the Denver Public Library, who were very helpful in assembling this information.